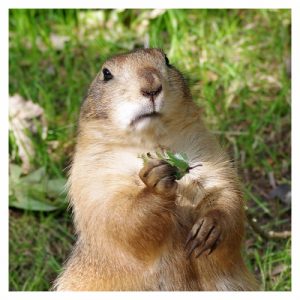 Last week we went to Wonderwereld in Ter Apel for an afternoon. In this small recreational park you will find amazingly imaginative caves with trolls and other magical creatures, as well as a small mini zoo. They have owls and other birds of prey, some monkeys and a serval. The latter however choose not show himself. The most fun was the playground, where four prairie dogs were busy playing and eating in the autumn sun. They have, as we were told, at some point escaped from their enclosure by digging holes and are now mostly found on the playground. At night they apparently return to their enclosure again. We also watched a little flight show with a barn owl and a Eurasian eagle-owl. Strangely enough, the prairie dogs did not care about the owls at all and just kept watching them fly over their heads. They were not scared of us either. Only if little children came too close, the animals would disappear into their burrows. In the new album Prairie Dogs you can see some of the pictures I made. The owls are in the album Birds of prey. Finally there are new some pictures of a friendly red robin in the birds album.