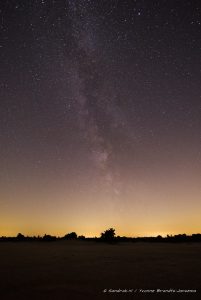 Last Sunday evening it finally worked out. I had a fun workshop night photography with Rutger Bus.
At earlier attempts, including one in the US, the weather did not cooperate, but now it was fairly clear. With a small group of people we went to the Aekingerzand near Appelscha, one of the darkest spots in the Netherlands. With the help of of Rutger’s instructions I have made some nice pictures. Amazing, how much more the camera sees than the naked eye. You can see some of my photo’s under Night Photos> Aekingerzand. In addition, I had some pictures of burning candles, so I’ve posted those on the website as well.

Update Sept. 28: Some pictures of Capuchin monkey’s added to primates, as well as a heron to Birds of prey.