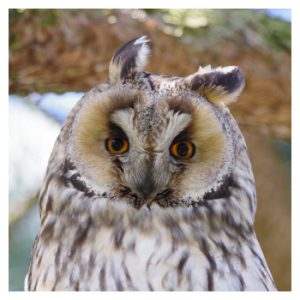 Last Wednesday morning we were called by our neighbor. He had heard the call of an owl during the night and had gone looking for it. He found a long-eared owl perched on a branch in the Scots pine tree in our backyard. Of course I immediately ran in to get my camera and take some pictures. Because the owl was high in the tree it was quite difficult. From his call we could determine that it was a male. We tried not to disturb him, but he did not seem bothered by all the sounds and people in the neighborhood and took a nap.

In the afternoon I went back into the garden to look, when my husband said: ‘He is in the Korean fir tree now. ’No, he’s still in the same place as before,’ I answered. As it turned out there was a second owl, this time a female. They have sat there all day, occasionally calling out to each other. The female was much shyer than the male, who followed the activities below him with interest. You can see it on the pictures by the way her ears are turned upwards.

At the beginning of the evening a cat had discovered the female and started climbing in the tree she was in. That was the signal for her to fly away. The male followed a few moments later. We have not seen them anymore, but sometimes we still hear their call, so they are still somewhere in the neighborhood. Very special to have this kind of guests r in your backyard. The photos can be found in the album Birds of prey.